Living with Fire Perspectives from the US

Fire knows no boundaries. No matter how many fences we lay down, fire will always find its way and gulp everything down. So, what is the solution? A cohesive fire management system, maybe?

In order to understand different perspectives on this burning issue, Pyrolife flew to the US for its June edition of monthly webinars where Shawna Legarza (Director of Emergency Management, La Plata County, Colorado, USA) provided some great insights from her personal experience of working as a first responder. Sam Marouk (Retired Bureau of Land Management/California State Fire Management Officer) discussed the opportunities, challenges and limitations of regional and state policy implementation, governance, and fire response in California, followed by concluding remarks on the use of fire for ecological stewardship in the bay area given by Sasha Berleman (Director of Fire Forward at the non-profit nature conservation organization, Audubon Canyon Ranch). 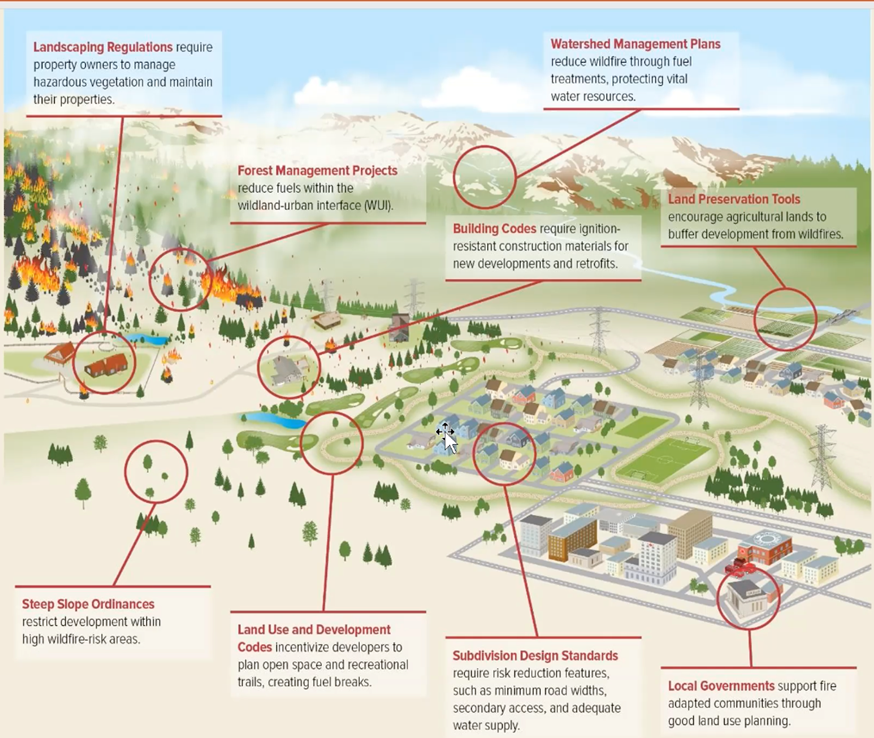 During her presentation, Shawna mentioned that the most difficult situation for her as a fire director was tying loose ends across boundaries for cohesive fire management, because different  jurisdictions and agencies have different authorities. She discussed how fire has been used as a land management tool for a long time, but risk related to smoke and burning are changing people’s perceptions and, for this reason, it has become even more important to educate people about current management practices and clear up the guidelines around best practices. She suggested adoption of a community-based approach to landscape building, which is more adaptive and more resilient for our future generation.

Sam Marouk later introduced some of the most significant federal, state, and local fire agencies in the US who have responsibilities in fuels management along with both response and suppression responsibilities. California, has a complex urban interface, faces challenges in accommodating residents, and they live within or adjacent to wildfire prone areas, resulting in a wildland-urban interface. Mowery et al, 2019 state that one third of the total population in California is situated in the wildland-urban interface. Marouk mentioned that California has very dense population centers such as San Francisco and Los Angeles, the aforementioned agencies and local volunteer organizations such as Fire Safe Councils have collaborated to prepare communities at risk. Lessons from previous fires have taught us that climate change, particularly temperature rises, causes drought and thus more dry fuel, which accounts for more intense and longer fires. 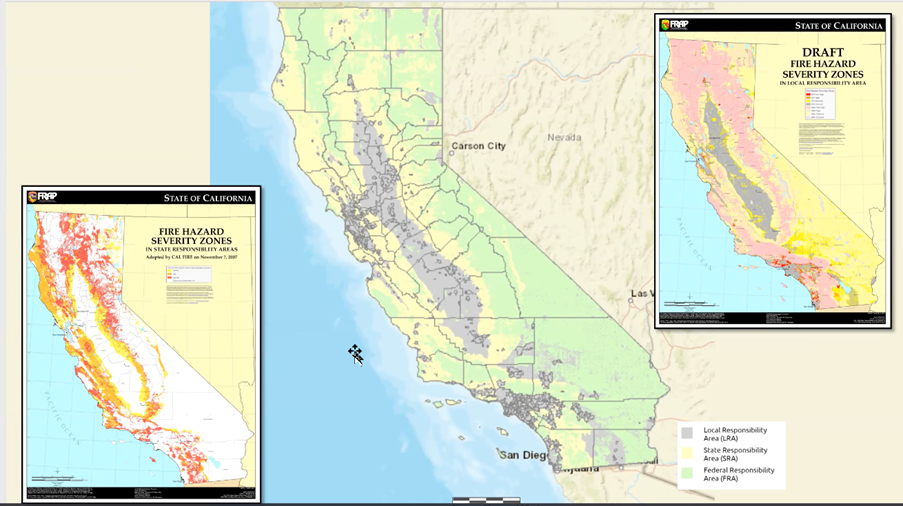 Earlier this year multiple large fires were started by lightning strikes and human causes in San Diego and Los Angeles, serving as a wake-up call to be prepared for such events. Marouk also stated that it is critical for the public to understand their role in the community response because federal, state, and local government agencies with land management responsibilities cannot do it alone; as a result, the federal, state, and local governments, together are organizing workshops and soliciting public feedback on the implementation of the plans and to be involved in the efforts to protect their communities.

Also, he discussed the “treatments” that could prevent large fires, such as prescribed burning, mechanical thinning and other fuel reduction methods. However, prescribed burning practices in California are difficult to implement due to the smoke they produce, which has a negative impact on communities. He mentioned that they have been able to show that wildfires were an important element in Earth System many hundreds of millions of years before the arrival of humans. Now, in the vast timbered areas that have not seen fire for decades due to suppression efforts of the past, the fuel buildup and environmental conditions such as long-term drought makes it difficult to use fire as a tool to mimic the frequency and low to moderate burn severity that occurred prehistorically. 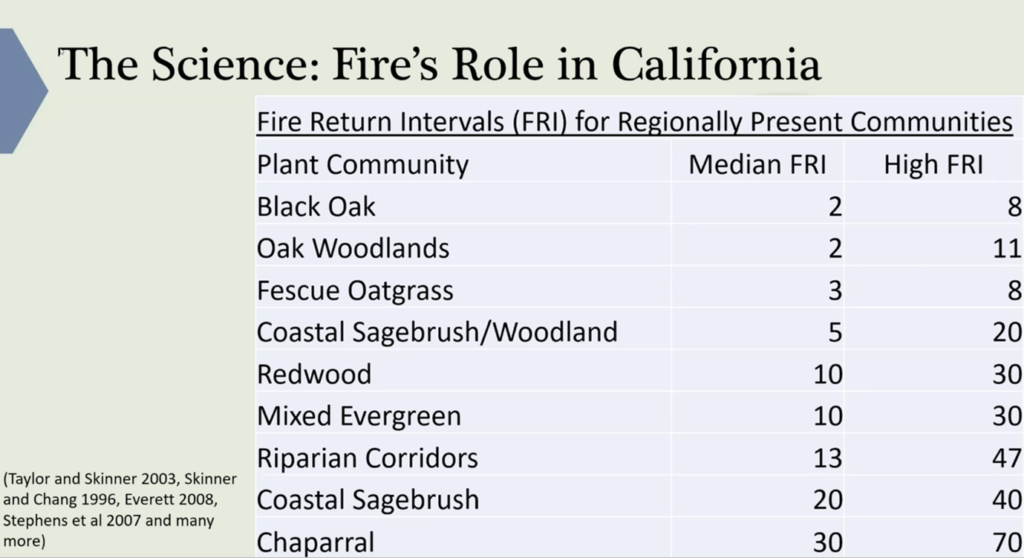 Sasha Berleman continued this interesting conversation about the response of the local government to the environment. She presented some of the catastrophic fires in the Bay area that have occurred in recent years. Because of its dense population, the bay area encompasses the majority of the region’s indigenous tribes, which date back thousands of years. Fire in this region has been there for a long time as people in this area use fire predominantly as a tool, so not just lightning but also people, are considered to be the main cause of large fires.

Berleman discussed a series of ecosystems in the region that are highly fire dependent, for example the Oakland for which the median fire return interval is around 2 years and can go as high as 8 to 11 years and the grasslands which should be burning around every 3 years and then are the forests in this area which are also adapted to frequent fire as soon as 10 years.

Berleman discussed a number of ecosystems in the region that are highly fire dependent, such as Oakland, where the median fire return interval is around 2 years and can range from 8 to 11 years, grasslands, which should be burned every 3 years, and forests, which are also adapted to frequent fire as soon as 10 years. She also mentioned the redwood forest in the San Francisco Bay area, which has a four-year burning cycle. She also mentioned, it is not always important how frequent the fire is but the type of fire which is a result of extreme weather conditions or human induced activity as these areas have not seen fires in a long time and now they are burning in high intensities than the ecosystem can actually support. 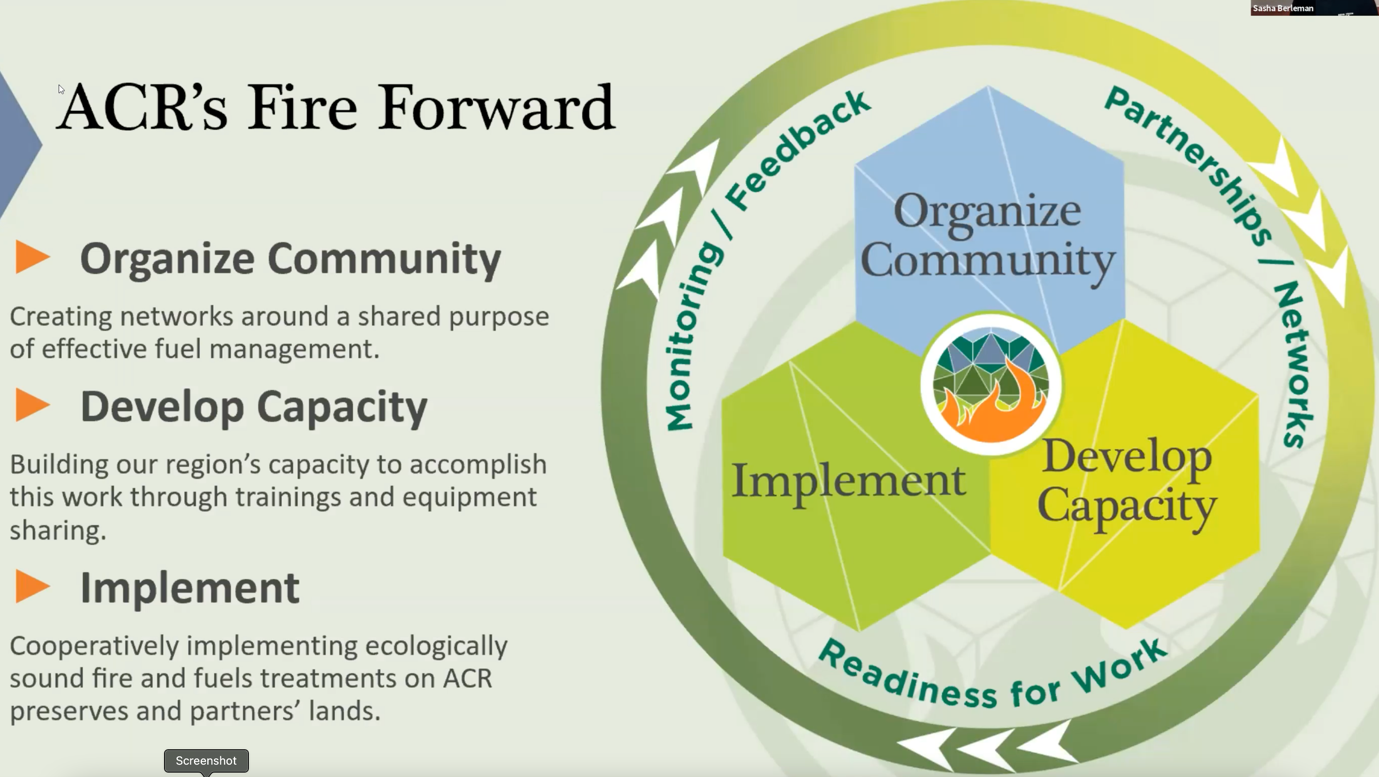 Berleman also brought to attention some of the reasons of why they use fire on the landscapes and why is it important to do so, some of them being:

In the end, she spoke about her work, which is creating a network for effective fuel management by capacity building and providing useful training to interested participants.

In conclusion, all the three speakers supported living with fire and emphasized on learning ways to live with fire, which could be done by educating people about fire and teaching them how to use fire in order to change the dialogue around the human relationship with fire on the landscape.

Fire & flame for the protection of an ancient human heritage: European coastal Calluna heathlands
The Arakapas fire in Cyprus: a global perspective based on integrated fire management