A burning issue: Understanding the imprints of humans on the ecology and evolution of coastal heathlands

For the May version of the PyroLife ‘Living with Fire’ webinar, Prof. Vigdis Vandvik (University of Bergen) gave a fascinating lecture on the imprints of human land-use on the ecology and evolution of coastal heathlands. Coastal heathlands are barren, inconspicuous landscapes, dominated by dwarf-shrubs such as Calluna vulgaris,  that cover extensive areas along  the European oceanic coasts from the north of Norway to Portugal. 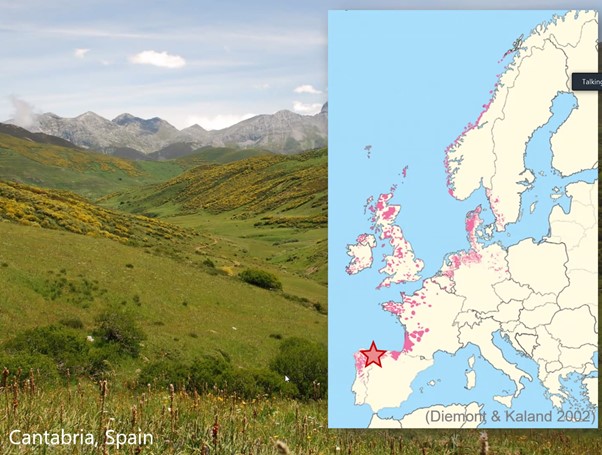 Palaeoecological reconstructions indicate that since around 6000 years before present (Prosch-Danielsen and Simonsen 2000; Hjelle et al. 2010), the dominant vegetation in the landscape changed from trees, herbs and grasses to Calluna heath. The landscape changes in the record coincide with the appearance of charcoal dust, which is taken as an indicator for human management regimes in landscapes wherein natural fires are very rare. 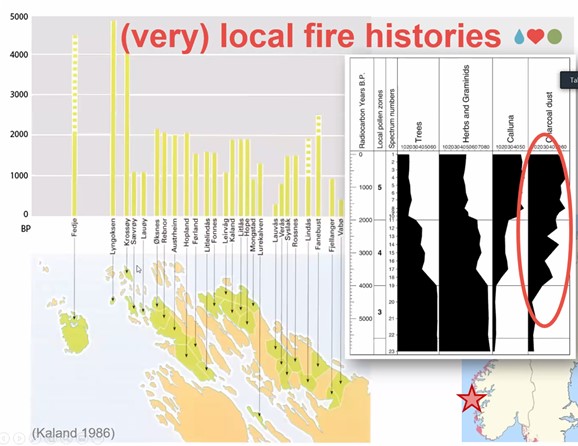 Fig 2: Palaeoecological reconstructions indicate the landscape changed from being tree, herb, and grass dominated to Calluna thousands of years ago. At the same time, the presence of charcoal dust increases

Prescribed fires in heathlands today show that a managed return interval of controlled burning every 15-25 years helps to regenerate mature heath and maintain characteristic biodiversity, thereby preventing the degradation of heathlands (Vandvik et al. 2005, Velle et al. 2014). Different ecological traits indicate an adaptation of Calluna to fire. Calluna produces large amounts of seed and have massive seed banks (Måren et al. 2009). The seed germination in coastal Calluna populations is stimulated by exposure smoke, leading to increased seedling recruitment after fire.  This response does not occur in inland heathlands without long-term indicators of fire, suggesting that the smoke response in Calluna has evolved in response to a human prescribed fire regime that has shaped the coastal heathlands of Europe over the millennia (Bargmann et al. 2014). Only five years after burning, the heathlands are fully covered in heath again. The original motivation for humans to start controlled burning in heathlands might have been to maintain a year-round and labor extensive fodder resource for livestock. 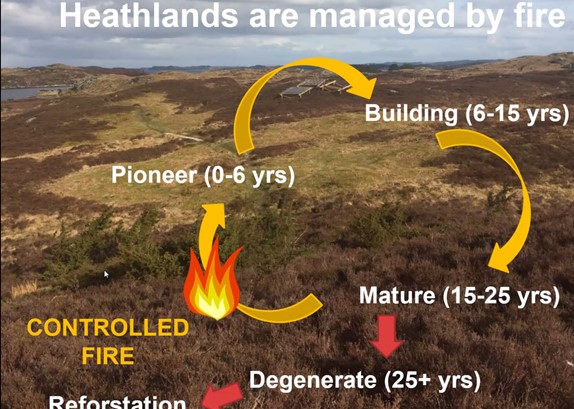 Conservation efforts for the unique Calluna heathlands must anticipate anthropogenic climate change causing more extreme weather conditions, such as wetter, but also more frequent drought periods. Experiments show that mature heather in unmanaged heathlands quickly dries out and turns into fuel, thereby posing a fire risk to the surrounding system. Young Calluna in managed heathlands (e.g. by prescribed fire and or grazing) however is more tolerant to drought, stores higher amounts of carbon in the soil, and fosters a higher species diversity. 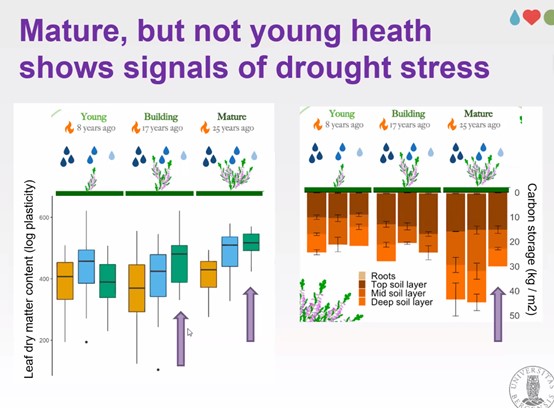 Fig 4: Prescribed burning in heathlands can be used to prevent young heath to reach a mature state, wherein the plants are more susceptible to drought and therefore pose a higher fire risk in drought periods.

Over the last century, fire suppression has become a global standard response to burning in many fire-adapted ecosystems globally. A peak into the longer history of Calluna heathlands however shows that the management of heathlands with fire (and grazing) has a very long tradition with benefits for the ecological system, a technique that might be key to conserve and manage them in a warmer and drier future.

Hjelle, K.L., Halvorsen, L.S. and Overland, A., 2010. Heathland development and relationship between humans and environment along the coast of western Norway through time. Quaternary International, 220(1-2), pp.133-146.

Prøsch-Danielsen, L. and Simonsen, A., 2000. Palaeoecological investigations towards the reconstruction of the history of forest clearances and coastal heathlands in south-western Norway. Vegetation History and Archaeobotany, 9(4), pp.189-204.

Q&A: Wildfire and flood risk in the Mediterranean – Identifying gaps, challenges and opportunities towards integrated risk management
Living with Fire Perspectives from the US