The Arakapas fire in Cyprus: a global perspective based on integrated fire management

Fire science: in language for all, PyroLife Symposium - Webinar Summaries

“Pure hell”, “worst ever”, “most destructive” are some of the most common phrases used by the media for one of the biggest wildfires in Cyprus, which started on Saturday, the 3rd of July in the Limassol district near the village of Arakapas, consuming everything on its way from thick gnarled trunks of ancient olive trees, to houses and farms, leaving behind smouldering stumps and a charred landscape. Officials say the blaze was fanned by strong winds, sweeping at least 10 communities over an area of 50 square km. After less than 24 hours and with aerial support from Greece and Israel through the European Civil Protection Mechanism, the Arakapas fire was finally controlled. However, current land management, climate warming and a fire prone ecosystem assure that it was not the last fire in Cyprus. The forests will recover in some time, and the carbon dioxide released by the wildfire will get reabsorbed from the atmosphere. So, what options do we have to create homes, communities, landscapes and forests that can coexist in a future with fires without them becoming a threat to human lives and assets?

With two consecutive fires in Nicosia and Limassol the fire-fighting response at Arakapas was worth appreciating, however, it manifests if we are taking the right approach towards managing the risk of such events. In the meantime, blame game took over its pace, people are urging for answers about the preparedness approach and the government is criticized for not implementing the required recommendation after the Solea fire in 2016. Cyprus, like other ecosystems in the Mediterranean and globally, has a long history of fire use by humans. Controlled, early-season fires burning at low-intensity were commonly used by shepherds and agriculturalists over hundreds of years, but deemed harmful and banned under British occupation to prevent the assumed degradation and protect the forest according to colonialist ideas and values (Harris, 2012). 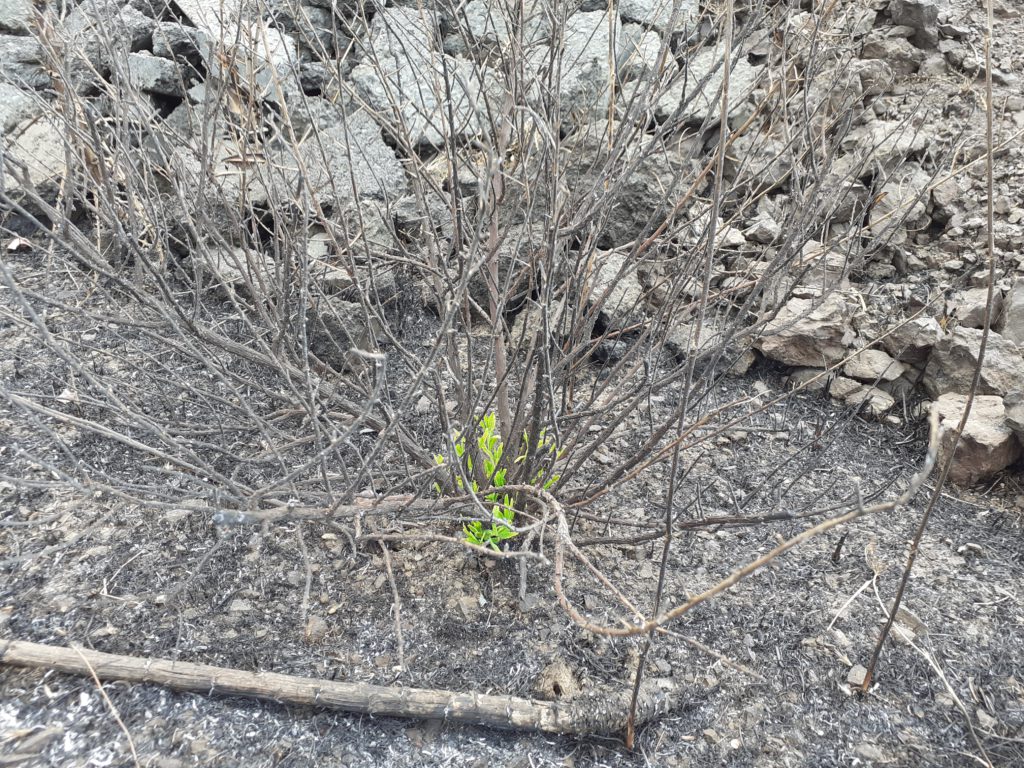 The paradigm changes that fire managers and scientists ask globally also offers opportunities in Cyprus. As long as we consider flames as the problem, we will end up addressing the problem from the wrong side – while budgets for aerial suppression are constantly increased, the underlying causes and drivers of fire risk are hardly addressed. When taking a broader and global perspective on fire prone environments like the ones in Australia, US, Canada, or South America, research shows that as fires are entirely banned or completely suppressed for various reasons (including to protect people from smoke or fire hazard, for nature conservation, to protect timber resources, or to increase carbon storage), the fire risk ultimately increases and leads to larger, more dangerous fires in the landscape – something known as the ’firefighting trap’ or ’fire paradox’ (e.g., Collins et al. 2013, Calkin et al. 2015, Castellnou et al. 2019). Drivers such as land abandonment and crumbling interest in traditional smallholder agriculture in rural areas increase the amount of fuels and their connectivity in the landscape. Additionally, climate change exacerbates the fire risk through longer fire seasons. Fires quickly reach an intensity that exceeds suppression capabilities in extreme fire weather combined with strong winds, and extinguishment is only achievable when weather conditions change.

Ideas and opportunities for holistic & integrated wildfire management in Cyprus

We are convinced that in Cyprus also, there is a huge potential to holistically manage fires in the landscape, much earlier than at the peak of summer when flames are moving through the landscape and into the medial focus of attention. We need green solutions and policies that support sustainable farming, because agricultural areas, agroforestry, and the purposeful planting of less fire prone species such as Carob and Golden Oak can help to reduce landscape flammability and fire frequency. Moreover, rather than leaving all responsibility to the fire services, as a society, we need to discuss who takes the decisions, the accountability and responsibility for values such as fire safety, landscape scenery, action to mitigate climate change, and the allocation of tax money. Aerial response is important and necessary, but at the same time costly and ineffective under the extreme conditions that ultimately pose a risk to human lives and assets. When reactive response cannot keep up, the only option is to become proactive in prevention, preparedness, and mitigation of the risk. 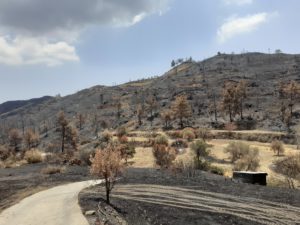 In Cyprus, with airplanes and strategic fire lookouts, much has already been done in terms of early fire detection, and the use of drones is currently under discussion. The Forest Department stations in Troodos and throughout the rest of the island are at the fore after the outbreak of fires, but defensible spaces around infrastructure, cell broadcast warning systems and better information during fire events would greatly improve fire preparedness. A large network of firebreaks is maintained, but fuel reduction through prescribed grazing, controlled burning or mechanical means is needed in strategic points to mitigate the intensity and spread of fires. Everyone located in an area with high fire risk must be aware of their individual responsibility and be prepared to defend their own property and shelter in place, or to evacuate early. Finally, the responsibility for fire risk management is currently shared among several organizations, including the Forestry Department, Fire Services, Civil Defense Force, Game Fund, British Bases, and municipal and prefectural governments. A single organization responsible to coordinate those efforts and ensure that fires are managed holistically on a landscape scale would contribute to sustainably increase wildfire resilience also in Cyprus.

CyprusLimassol
Living with Fire Perspectives from the US
Indigenous fire management. Lessons and challenges for the construction of a new paradigm of fire management with an intercultural vision.