Contact
PyroLife Blog
Home PyroLife Blog Workshop: “How is the territory preparing for the next wildfire?” in Pego, Spain

Workshop: “How is the territory preparing for the next wildfire?” in Pego, Spain

Fire science: in language for all

This article is written by Isabeau Ottolini, a PhD candidate at the Open University of Catalonia (UOC) and the European project, PyroLife. Her research focuses on Community-based wildfire communication. For this, Isabeau is doing her case study with Pego Viu, a land stewardship collective born from the ashes of the Vall d’Ebo wildfire in 2015.

During her fieldwork with Pego Viu, members of the collective told her about the need to learn from other territories that have had major wildfires or are at risk. For this reason, the idea of organising a workshop was born, with the aim of creating a space of dialogue to exchange, between different organisations and groups, experiences and knowledges about how different territories are preparing for the next wildfires.

In this article we share what we did during the workshop, and summarise the topics discussed, coverin the problems, proposals, and reflections on wildfires. We end with the workshop conclusions and ideas for next steps, aimed at creating a network among the amazing folks involved in the world of wildfires.

On Sunday 13th of February we held the workshop “How is the territory preparing for the next wildfire?” in Pego (Alicante), organised by Pego Viu, PyroLife, the UOC, the Pego Town Council and the Generalitat Valenciana.

More than twenty people attended to the event, including citizens, people from different (volunteer) groups related to wildfire prevention and land stewardship, members of public administrations, firefighters, etc. With this diversity of people, both in person and virtually, from the Valencian Autonomous Region and beyond, the workshop was an excellent and much-needed opportunity to gather.

“We can do a lot. We can hold workshops like these, this is prevention, it is working on territorial management, it is sharing, having a debate, presenting ideas that are not opposite from one another but instead come from the lived reality and knowledges of each of us, and learning from each other. (Ana Tortosa)

The day began with a round table. During this, the leading question was “how is the territory preparing for the next wildfire? Specifically, we focused on discussing how to move from planning (because there are many good wildfire prevention plans) to action (which is often lacking). We also explored the role of groups and collectives (such as Pego Viu, the ACIF or groups against wildfires…) in implementing these plans and helping to prepare the territory for the next wildfire.

At the round table we were honoured with the presence of:

In addition, the public also participated a lot in the discussions, including members of the Alzira Town Council, firefighters from different organisations (SISGE – Valencian Society for the Integral Management of Emergency Services, UBF – Wildfire Brigades), and citizens. 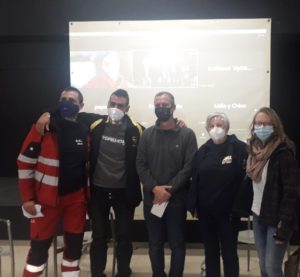 During the round table, we first talked about the problems surrounding wildfires.

Firstly, there are the dynamics that are leading to large and continuous forest masses:

“Every summer we listen for the sound of helicopters. We experience the reality of the big forest masses with great concern. It has always been an agricultural-forest territory, but now it is almost exclusively forest, because neither extensive livestock farming, nor Pinus pinaster resin, nor cork is profitable“.

The result is that there are increasingly larger areas of continuous forest in our territory, with a great risk of wildfires, and even more so under the context of climate change. This is why Rosa Sala tells that “in the past, we people of ABAI used to plant trees after a wildfire, but now it is more important that we clean the mountain and forest in order to prevent fires”. 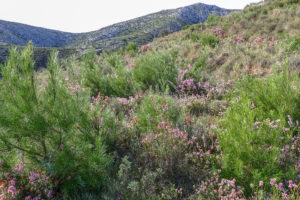 Rapid regrowth of pine trees and shrubs after the Vall d’Ebo wildfire in 2015. Photo: Isabeau Ottolini

Secondly, there is a lack of coordination and communication between all the people involved in wildfires and its prevention. This makes it difficult, among other things, to move from wildfire prevention plans to their implementation in the territory. Moreover, we often do not know the great work and efforts done by other groups and institutions, and we are thus losing out on great opportunities to join forces and work together, as a firefighter from Dènia points out.

Finally, during the round table we also talked about the problem of houses in the wildland-urban interface, and especially the houses that are poorly protected against fires. As Jorge Tortosa explains:

“According to the law and always under the direction of the brigade captain, the fire brigade is obliged to save people and houses first, before working on saving the forest. For this reason, a well-protected house is a valuable asset in wildfire fighting: there is no risk of fire, and the brigade does not have to go to save the house, but can instead go elsewhere to save many hectares of forest”.

Throughout the day, different proposals and reflections emerged to prepare the territory for the next wildfire.

Undoubtedly, the management of territory, forests and mountains is essential. It is not possible to prevent all fires, but by creating discontinuities in the vegetation, it is possible to limit the spread of fire across the territory and prevent it from becoming uncontrollable. Also, it is not necessary for the whole territory to be managed, but at least the strategic areas, which are determined in each Local Fire Prevention Plan, should be managed.

On one hand, fire can be a management tool. As Ana Tortosa says, “we no longer have the same relationship with fire in the territory as before, but we have to learn to use it again, to live with it, because the total elimination of fire from our ecosystem is impossible“. A member of the Alicante Wildfirefighters Unit explains that we can introduce fire back into the ecosystem little by little, as is already being done in various places in the region, such as Castell de Castells (here is a video report from the Terra Viva programme).

On the other hand, land management must be sustainable in every sense. And this includes economic sustainability, as Ferran Dalmau emphasises. Nowadays, agricultural, livestock and forestry activities, which are essential to land management, are not very profitable. That is why it is necessary, as Rosa Sala says, to:

“create workplaces that are profitable, that allow people to eat and earn a living. Moreover, they are not separate things: here is some burning, there are some tomato plants, over there is a water source, here there is a mountain hut with a pen and a goat, there is a grandpa cutting some trees.  It’s all this together, it’s an ecosystem”.

During the round table, ideas also emerged about what each one of us can do, from the diverse places we work and live in, as firefighters, volunteer groups, forest landowners, citizens, public administrators… We can all do our bit to prepare the territory for the next wildfire. 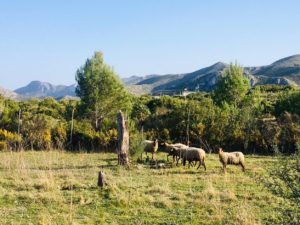 Firstly, they can become involved in the execution of Local Wildfire Prevention Plans as they have more agility of action than public administrations. This can include the creation and maintenance of strategic wildfire areas, such as fire breaks (Pego Viu does this with its herd of firefighting sheep). In the event of a wildfire, these places also form safe areas where firefighters can work without fearing being trapped by the fire.

Secondly, they can involve the local population through talks, workshops, courses, volunteer activities, etc., with local people, young people, but also people from urban areas. This is explained by Javier Asensi, based on his experience at Connecta Natura, through projects such as Lligabosc and Mosaics de Vida

The field visit to the Pego Viu land stewardship project 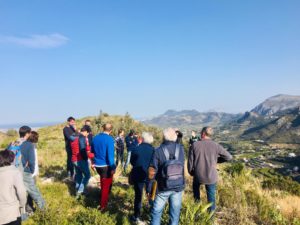 Once the round table was over, we first enjoyed a good meal (as any workshop should include!). Afterwards, we visited the Pego Viu land stewardship project and its firefighting sheep.

Heading up the mountains towards the Pla d’Almisserà, we first stopped to observe the landscape that was burnt in 2015, and the strategic wildfire areas. The management of these areas is challenging. On the one hand, because many of them are very small private plots, and the owners, for various reasons, are unable or unwilling to manage them, or even don’t know that they are landowners. On the other hand, the city council does not have the means to manage public land. In this sense, land stewardship by groups such as Pego Viu or Connecta Natura could be part of the solution, working in strategic locations to prevent and limit the impact of future fires.

Afterwards, the members of Pego Viu took us to see their pilot project with the firefighting sheep herd. With a herd of about 6 sheep of the native breed, the guirra, they demonstrate how extensive grazing can contribute to wildfire prevention.

The volunteers of Pego Viu take weekly turns to shepherd the sheep. Specifically, every day volunteers take the sheep to the plots that the collective has in custody, where these eat the grass and shrubs at the strategic wildfire areas. As we walked around the area, we saw that even a small herd can do a great job for wildfire prevention.

Conclusions and next steps

Néstor Portes, the president of Pego Viu, closed the workshop with these conclusions:

It has been a day full of enthusiasm and desire to continue building a network. For this reason, during the workshop we came up with several ideas for the next steps:

Do you have any more ideas? Would you like to participate in any way? Please get in touch with Isabeau Ottolini at at iottolini@uoc.edu

Thank you all for this wonderful day!

Soon we will share the link to the zoom recording of the round table, and the video-summary of the whole day.