Get to know Nemer Abusamha

My name is Nemer Abusamha, I was born and raised in Jordan. I worked as a fire engineer at ARUP, and gained a Master of Science degree in Fire Safety Engineering from the International Masters of Science In Fire Safety Engineering (IMFSE), which is an Erasmus Mundus Program. I obtained my bachelor’s from Eastern Mediterranean University in Cyprus, an ABET-accredited university. I am working on studying how to mitigate fire propagation in Wild-Urban Interface vegetation and impact on the building which is ESR 8 in the PyroLife Ph.D. program. Wild-land Urban interface (WUI) is when urban development and wildlife intermix.

I am based at the National Research Institute for Agriculture, Food and Environment (INRAe), INRAe have research centers across entire France. I will be based in Le Tholonet near Aix En Provence in the south of France. I am also interested in taking part in PyroLife committees in the diversity and data committees.

Example of the French regulations for the home ignition zone. Source

I will be working on developing the first steps towards the design of the initial European guidelines for firewise landscaping, EUFireWise. The first step towards designing a firewise landscape is to understand the structure ignitability which is the work of ESR 7. The immediate surrounding as defined as home ignition zone (HIZ) which is the scope of the work for my topic. I will be studying the spatial distribution of the wild-land urban interface vegetation and the vegetation flammability in the southeast of France, the most fire-prone region in France that is composed of 15 departments. I will be studying the implementation of the separation between vegetations, firewise plant selection, and brush clearing areas in the WUI within multiple zones called defensible space which will be derived into inputs for the physics-based computer modeling called Wild-land Urban Interface Fire Dynamics Modelling (WFDS). Fire behavior legs in wildfires are fuel, weather, and topography.

Fuels can consist of ornamental vegetation, natural vegetation, and organic and other fuels near to structures, i.e. automobiles, LPG tanks, campers, etc. The element that can be controlled and modified in the wildfire behavior triangle is the fuel element that is vegetation as weather is uncontrollable and topography composes lots of challenges despite their importance in driving and influencing the fire behavior of wildfire. Vegetation is one of the most important factors for mitigation besides structures to consider in wildfires as WUI vegetation fires can damage the structures. Similar approach will be conducted at the secondment host University of Wageningen in the temperate region considering the Netherlands for study and compare the outcome studies with the American FireWise program at the NFPA. 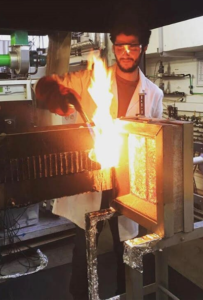 According to Jack Cohen a physical scientist working with the US Forest Services, the home ignition zone is mainly a structural ignition problem besides many aspects to be considered for the problem. The focus on vegetation has an important role in establishing a resilient landscape. Fire-related flammability tests are the first steps towards gaining data that could help in fire modeling. The modeling will help to understand the fire propagation in the WUI fuel systems.

I am looking forward to gaining a deep knowledge based on systematic and innovative training alongside the research work I am performing. The knowledge that can be implemented nationally and at large scales, to help to build a resilient and firewise landscapes at national levels.